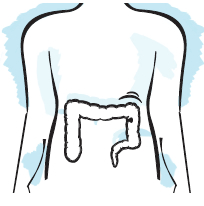 A bowel (colorectal) polyp is an abnormal, fleshy lesion that grows from the inner wall of the large bowel.  Approximately half of all Australians are likely to develop a bowel polyp during their lifetime, but many of these remain undetected.

If polyps are left untreated for years, then some will develop into a bowel cancer.  Polyps once found should be removed, and this is normally quite easily achieved during your colonoscopy procedure.

Complete removal prevents a polyp from progressing to a bowel cancer, but the mere finding of polyps often indicates an increased future risk of cancer, and follow up colonoscopy may be recommended.

Polyps vary in type, shape, size, location and number, and all of these factors may influence future bowel cancer risk and follow up recommendations.

There are two main types of polyps; adenomatous and hyperplastic.  As a rule, adenomatous polyps can develop into bowel cancer, and follow up is important.